After breeding Polled Herefords for more than half a century, we at Parker Brothers still feel the same excitement and anticipation about a new calf crop as we did about our first two calves’ years ago. In 1942, Kenneth and Houston Parker purchased their first two registered Polled Hereford heifers. In 1959 they purchased a herd sire, CEK Perfect Mixer at the National Polled Hereford Sale and Show in Shreveport, Louisiana. From those humble origins Parker Brothers has established one of the most respected and longest continuing Polled Hereford programs in the south. Rather than follow fads, the goal at Parker Brothers has always been consistency in production, breeding and quality. In our breeding program we try to incorporate proven A.I. Sires and Dams. We use Sires that will improve our milk, weaning, intra-muscular fat and rib-eye area. With new advancements in technology we are successfully flushing the best of the herd. We continue to change in order to improve the beef cattle industry. Parker Brothers held their first production sale in 1966 and regularly holds a herd dispersal sale every three years. Through the years the Parker Brothers have actively promoted the beef industry by serving as President and Director of the Cumberland Beef Breeders Association; Organizer, Director and President of the Mid-State Livestock Producers Association; President and Director of the Middle Tennessee Polled Hereford Association and Director and Chairman of the Board of the American Polled Hereford Association. The Parkers were named as Tennessee Family of the Year by the Tennessee Polled Hereford Association. Parker Bros. began with Houston and Kenneth and their spouses Lyda and Delois Parker. Son David, (Paula) and their family, of founding Brother Kenneth Parker begins a new era at Parker Brothers. David is still making strides in the industry, by winning TN Cow/Calf Producer of the year in 2013.

The Parker Family has started a new venture by marketing their steers locally and selling them as farm fresh beef in Middle Tennessee. Parker Family Farms Beef is available to purchase directly from the farm, or at local markets. This is the reason that our bull quality is outstanding, because only the best of the best remain as breeding stock. Parker Brothers will continue to maintain its breeding program through the interest of second, third, fourth, and fifth generations of the Parker Family.

A recently received Article from the first sale: 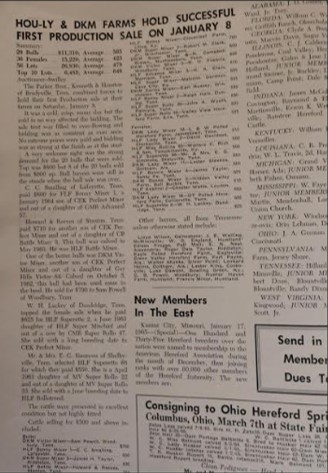 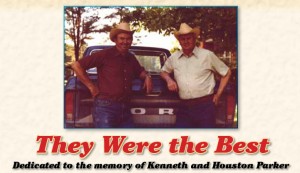